Boise Homes and Condos for Sale

Boise is many things. Urban and outdoorsy. Wild and relaxing. The Boise area is a great place to live, work and visit! Whether it’s the vibrant cultural and recreational opportunities, the friendly people or the mild climate, Boise and the surrounding communities afford a quality of life second to none. Good jobs, affordable housing and a safe, clean and vibrant downtown all add up to a great place to live. Nestled in the Treasure Valley against the majestic foothills, Boise is part of a thriving metropolitan area of over 550,000 people. Boise is the largest metropolitan area in Idaho, and also the most remote metropolitan area in the United States, fostering a “unique sense of community.” Situated where the high desert meets the western edge of the Rocky Mountains, Boise is the gateway to exceptional recreational opportunities including: world famous white-water rafting, Nordic and Alpine skiing, snowboarding, hunting, fishing, backpacking and camping. Hiking, biking and fishing are popular activities right in the metro area, accessed by miles of greenbelt along the Boise River. The foothills provide trails for hikers and bikers of all abilities.

Boise occupies a large area — 64 sq mi according to the United States Census Bureau. Like all major cities, it is composed of several neighborhoods. These include the Bench, the North End, West Boise and Downtown, among others.

This home will welcome you with open arms. Cozy up to the wood-burning fireplace and relax with your favorite beverage. Your new home boasts a very central location, w...

Built in 2016 and better than new with all the added bells and whistles. The great room with full stone fireplace & TV are flanked by built-in cabinets. Impressive kitche...

Wonderful home in a great location! NO HOA. Great home with a lot to offer. Two living spaces and plenty of cabinet space in kitchen. Solar panels for heating are amazing...

The Huckleberry is a charming 3 Bedroom, 2 Bathroom open layout that maximizes space and provides excellent flow from room to room. It combines the kitchen and family roo...

The Ridenbaugh is quaint and refined. You’ll love the bright entry that opens up to the kitchen. This home’s great-sized pantry, ample storage, and 3 big bedrooms will re...

This West-Boise bungalow is unapologetically charming! 5800 Gary is a head-turning craftsman with large trees, big windows, and views of the nearby Boise foothills. Newly...

Information courtesy of Intermountain Multiple Listing Service. Information provided by IMLS is deemed reliable but not guaranteed. IDX information is provided exclusively for consumers' personal, non‐commercial use, it may not be used for any purpose other than to identify prospective properties consumers may be interested in purchasing. IMLS does not assume any liability for missing or inaccurate data. All listings provided by IMLS are marked with the official IMLS IDX icon.

Earn up to 1% back with Rebates Realty!

Enter your sales price to determine your rebate:

How do I get a Rebate? 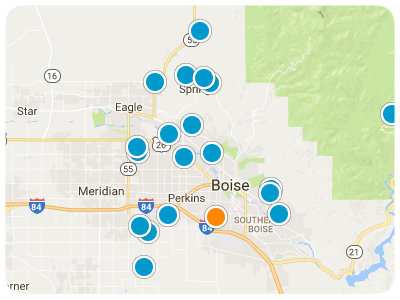